The Global AIS on Space Station Payload Launched to the ISS

The GLASS payload, also called Maritime Awareness, has successfully been launched on the SpaceX, CRS 9 mission to the International Space Station. Flexitech LLC, designed and manufactured the RF distribution system integrated into the GLASS payload. Kevin Jackson, Chief Engineer at Flexitech LLC said “we are all very proud of the hard work and dedication that has gone into getting GLASS from an idea to a payload on the ISS”.

The GLASS payload project was managed by JAMSS under a grant from CASIS. Engineers at Flexitech and JAMSS are very grateful for the help and enthusiastic support that CASIS gave to this project and the trust they put in the team to deliver. GLASS Is scheduled to be installed on July 27, 2016 in the Columbus Module of the ISS.

More details of the GLASS payload can be found at NASA’s webs site at: Maritime Awareness 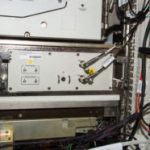 GLASS Payload Is Operational on the International Space StationNews